Self harm, attempted suicides and self hate.

So this is quite hard for me and I hate the fact that there are so many people going through this alone, I could never and still can't tell people that I want to hurt myself.


This might sound crazy to some people and it normally shocks me afterwards but I would like to tell you and get it out there. 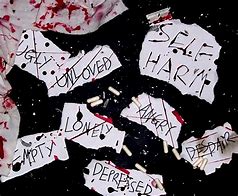 I have been cutting myself on and off since I was in my late teens and it kind of  felt normal as I grew up seeing my mum do it. These bouts of cutting were never really too bad ... until I hit my twenties then I took it a step further.

After a night out with my closest friends I headed home and all of a sudden I had this crazy urge to hurt myself, I started to punch myself in the face ... I was hitting myself so hard I was seeing stars.
I walked home and screamed at my mum and little sister to leave me alone otherwise I would stab them. I was filled with this uncontrollable anger and I didn't know why, there was no warning signs or any problems earlier that evening.

I took all my mums medication in to my room and necked a massive cocktail of pills and washed it all down with a beer.

I remember laying on the bed after and thinking " this is actually it, I'm dying " and I was calm and actually at ease with this. I was actually ready to die.

I woke up in hospital in absolute agony and more than any think I was gutted that I was alive. I was in hospital for over two weeks as I had acute pancreatitis.

The doctors thought I have been attacked and were so shocked when I told them that I had battered myself.

I didn't get any help from the mental health team or anybody else once released from hospital and I would later go on to try and take my own life on two more occasions.

I can't really tell you how many times I have cut myself over the years but I have left myself with so many scars, I still do it to this day.

whenever I get stressed or have a bad anxiety attack  I generally tend to cut myself. . . It's a release for me. .

2009 just before my mum passed away I had another break down and had self harmed and was this time taken into a mental health hospital where I stayed for four months.

Now 2018 and having been diagnosed with Bipolar / Personality disorder am I only starting to get a little control. I know this is something I will always have to deal with but I know I am no longer alone.

One thing I really struggle with is the hate I have for myself, I hate the things I have done in the past, the people I have hurt and the people I have let down.
Could this be the reason why I hurt myself... is it to punish myself?.
- November 03, 2018
Email ThisBlogThis!Share to TwitterShare to FacebookShare to Pinterest